Osso Buco alla Milanese is a cherished trademark of Milan, popular in the winter, when its rich and filling qualities are appreciated.

“L’oss bus a la milanesa” as it’s called in Milan, the fashion and design capital of Lombardy and northern Italy, is one of the most venerated recipes in Milanese culinary tradition. Like lasagne in Bologna, brasato in Turin, and Baccalà mantecato in Venice, Osso Buco alla milanese is a cherished trademark of Milan—jealously guarded against outside influence, despite the massive immigration from southern Italy into Lombardy in the 50s and 60s. Though often regional recipes and culinary customs are learned and appreciated elsewhere, a great dish is like a great painting: it shouldn’t be tampered with. 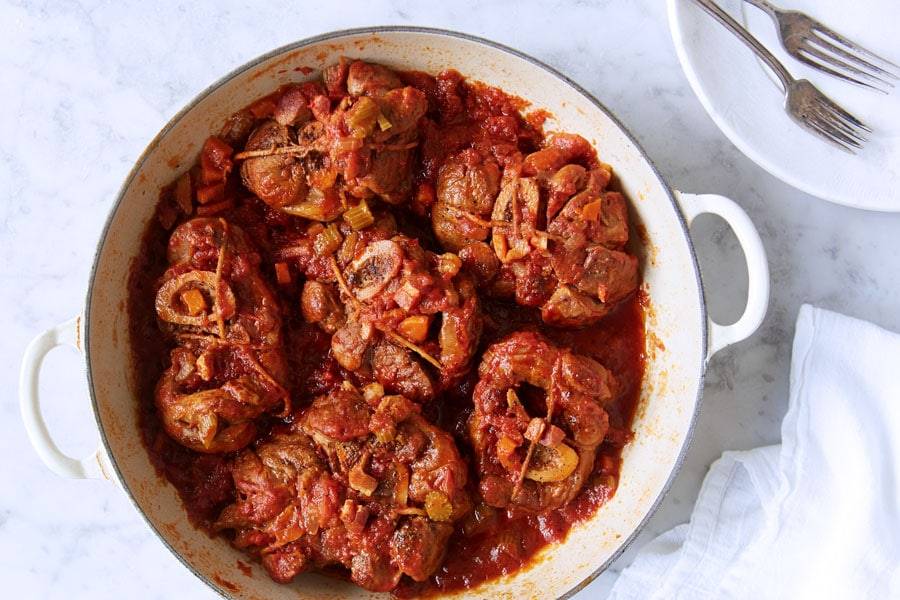 Osso Buco alla milanese is particularly popular in the winter, when its rich and filling qualities are especially appreciated. In centuries past, the posterior leg of veal, cut into slices across the bone (called ossobuchi, plural form in Italian), would have been affordable only on special occasions by the middle-class Milanese families. The famous Osso Buco alla milanese recipe as we know it today was probably created by the private cooks of the affluent bourgeoisie, or perhaps was an invention of one of the renowned chefs working in the city. The culinary legacy of this period is described in “Vecchia Milano a tavola” (Old Milan, at the Table), a beautiful book edited by Giovanna Falzone.

The essential secret of Osso Buco alla milanese is patience and simplicity. It is a great example of a “piatto unico,” meaning a dish that is nearly a whole meal on its own: succulent meat accompanied by “golden rice,” as rice with saffron was first called (occasionally polenta is served instead of rice). In the 18th century, ossobuchi used to be cooked without any trace of tomatoes, which were practically unknown at the time. Today the dish consists of very fresh veal shanks (normally one slice per person), patiently braised with what are often called in Italy “odori”—one onion, a carrot, and a celery stalk—as well as a couple of ripe or peeled tomatoes, white wine and some broth, which adds a crucial touch and is very useful when the sauce becomes too thick. The flour (lightly applied to the veal), the marbled meat, the juicy marrow, and the wine make for a delicious smooth sauce unique to this dish. The bone marrow is certainly an essential aspect of the very particular taste and texture of ossobuchi. Marrow can be used instead of oil or butter in many recipes for stewed or braised meat; it is also indispensable in the making of some celebrated risotto—in particular, the classic Risotto alla milanese (seasoned with saffron), which is the traditional accompaniment for this dish. The risotto should be prepared as usual, perhaps using a smaller amount of parmigiano than you normally would. The perfect finishing touch for Osso Buco alla milanese is a simple condiment called gremolada—made with parsley, a bit of garlic, lemon zest and half an anchovy, all finely chopped—which is added to the holes formed in the shank bones (where the marrow has partially dissolved during cooking) just before serving. In Milan, the custom of digging in the hole with a tiny spoon is ironically—and affectionately—called “tax collecting” (riscuotere le tasse). The thick lean meat that surrounds the bone is soft as butter; the combination of the meat and the sauce and the gremolada is sublime. 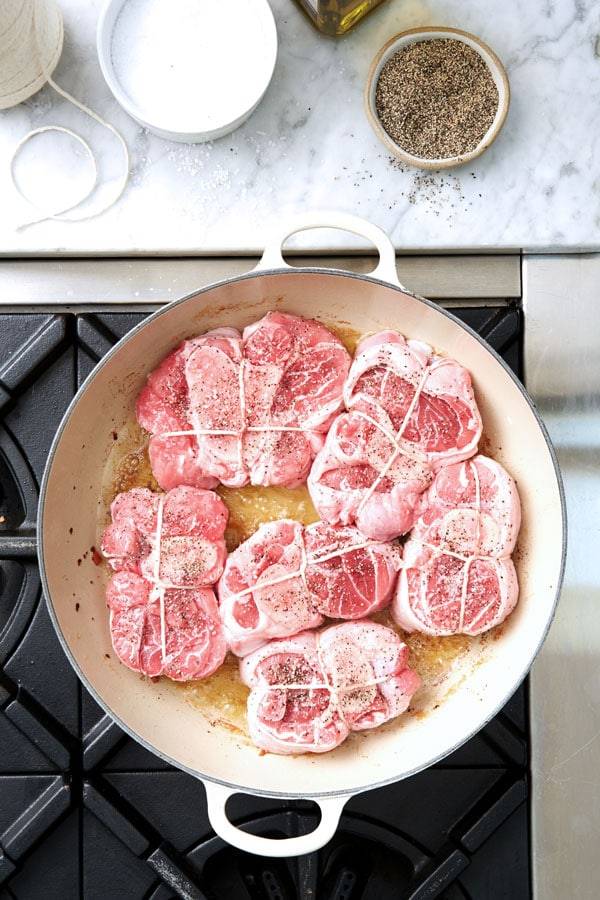 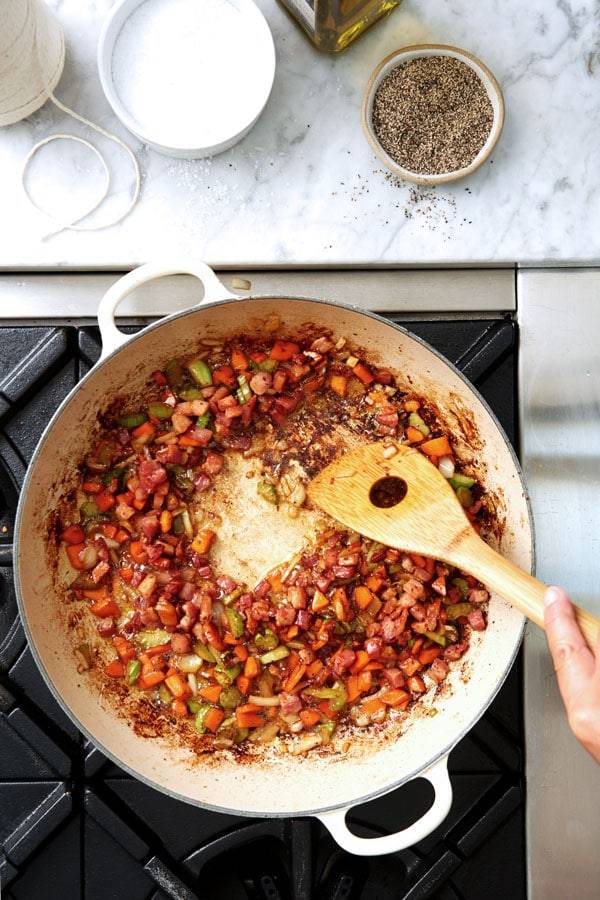 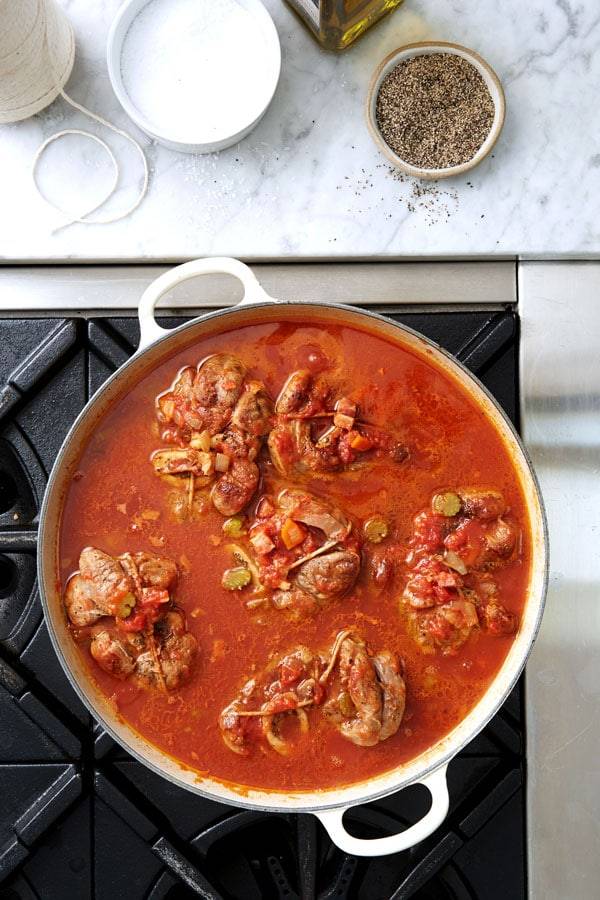 Ossobuchi alla milanese will make any carnivore happy enough to want it again and again—fortunately, it is an easy dish to prepare; click here for the authentic Milanese recipe. The original recipe calls for the middle part of the veal shank where there is more marrow. Look for veal shank with a generous proportion of meat to bone. Each slice should be about 1 to 1 ½ inches high, and ideally 5 inches or less in diameter. One final suggestion: if you go to Italy, try to eat ossobuchi in Milan (rather than in Rome or Florence)—preferably at the home of a friend!