How To Cook Perfect Pasta

Cooking pasta is as easy as boiling water, but cooking pasta correctly is about paying attention to detail. You can help your pasta dish to be its best by knowing a few of the hows and whys of cooking pasta. This guide will teach you how to cook the perfect pasta.

6 Steps on How to Cook Perfect Pasta

1. For every one pound of pasta, bring 5 quarts of water to a rolling boil. Once water is boiling, add salt. We recommend about 2 tablespoons of coarse sea salt to every 5 quarts of water. Don’t be afraid to salt your pasta water. But please don’t add oil!

2. Add the pasta and stir to keep the pasta from sticking. Stir within the first 2 minutes of cooking pasta. It’s more likely to stick together in the beginning before the starches are released into the water.

3. Check pasta for the al dente moment: 2 – 3 minutes prior to the pasta cook time. This texture can be described as tender with a firm bite and a fleck of white at its center. This is known as the pasta’s soul. Take a bite to be sure.

4. Once pasta is done, turn off the heat and scoop out 1 cup of pasta cooking water. Reserved pasta water contains essential starch that can be used later to adjust the consistency of your sauce—both to thin and to thicken. This soupy looking water you used to throw down the drain is actually a miracle ingredient!

5. Quickly and loosely drain the pasta into a colander in the sink. Noodles should still be wet. Do not rinse the pasta, though. The starch in the water is what helps the sauce adhere to your pasta. Rinsing pasta will cool it and prevent absorption of your sauce. The only time you should ever rinse your pasta is when you are going to use it in a cold dish like a pasta salad. In cases such as those, rinsing the pasta helps to stop the cooking process.

6. Toss pasta in a warmed saucepan with your prepared sauce. Cook pasta with sauce for about 2 minutes to marry flavors. Now it’s ready to serve! That is how to cook the perfect pasta. 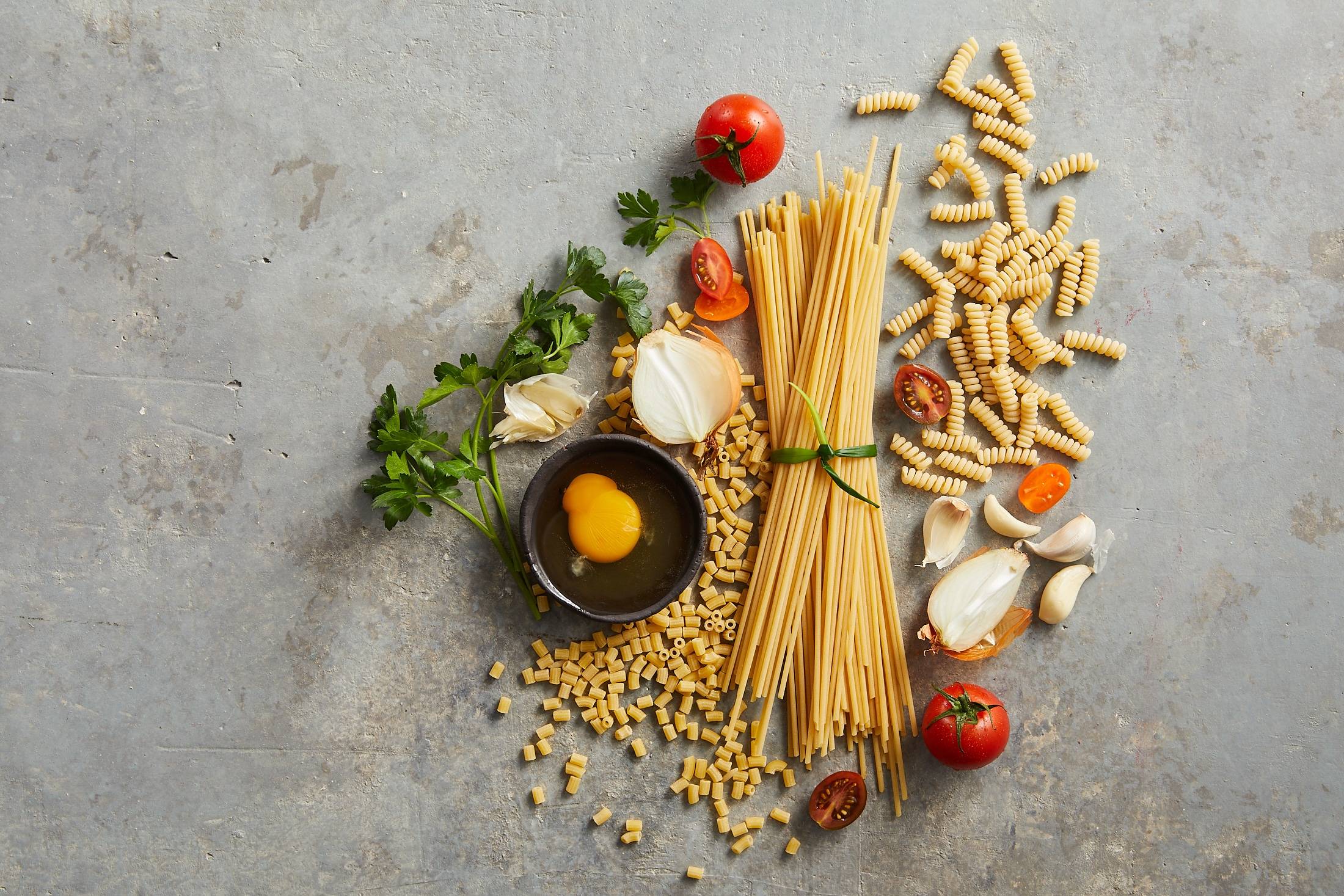 Do you really need this much water?

If you’re only boiling a small amount of pasta (less than half a pound), you don’t need so much, but a generous pot of rapidly boiling water is necessary for two reasons: it is easier to submerge long cuts of pasta like spaghetti and it helps to reduce sticking by giving the pasta enough room to move around. If you experience sticking pasta, it’s probably because you are not using enough water.

My water is just barely boiling, not rapidly.

Can I save some time and place the pasta in now? Adding the pasta to water that isn’t boiling will actually increase your overall cook time and cause your pasta to sit in the water longer. You will end up with pasta that has absorbed too much water with a mushy texture. Be patient and wait for a rapid boil; it’ll pay off.

Salt? Can’t I just salt my pasta after I cook it?

It’s necessary that you salt the water before adding the pasta so that the pasta can absorb the salted water while cooking and retain flavor. A little salt in the pasta water can go a long way, adding flavor to your final dish. Once the pasta is cooked, you have lost your chance to season the pasta.

Can’t I add oil so the pasta doesn’t stick?

While this can prevent sticking, it is not a good idea. Pasta that is cooked in oily water will become oily itself, and as a result, the sauce slides off and doesn’t get absorbed. This is how you end up with flavorless pasta. 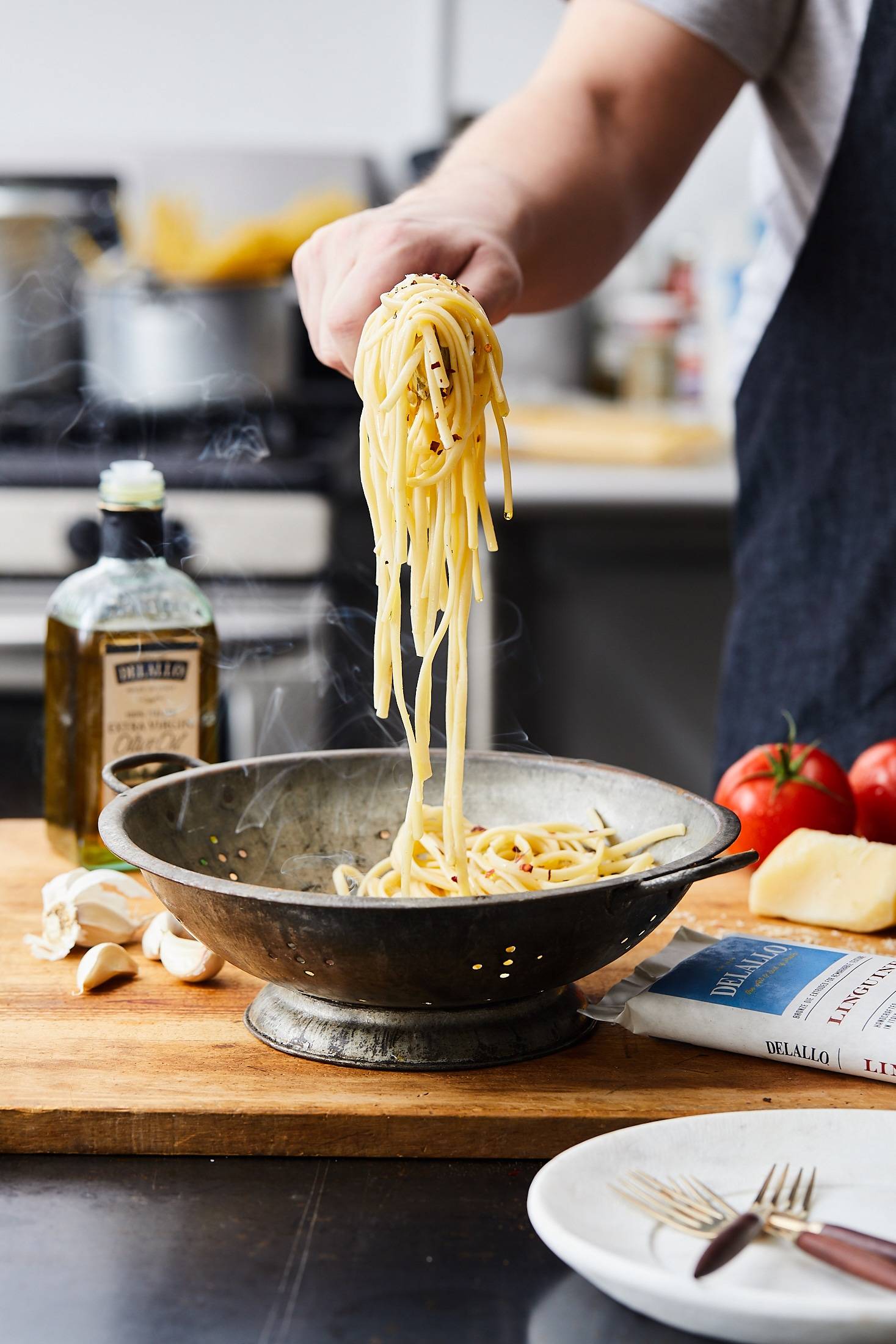 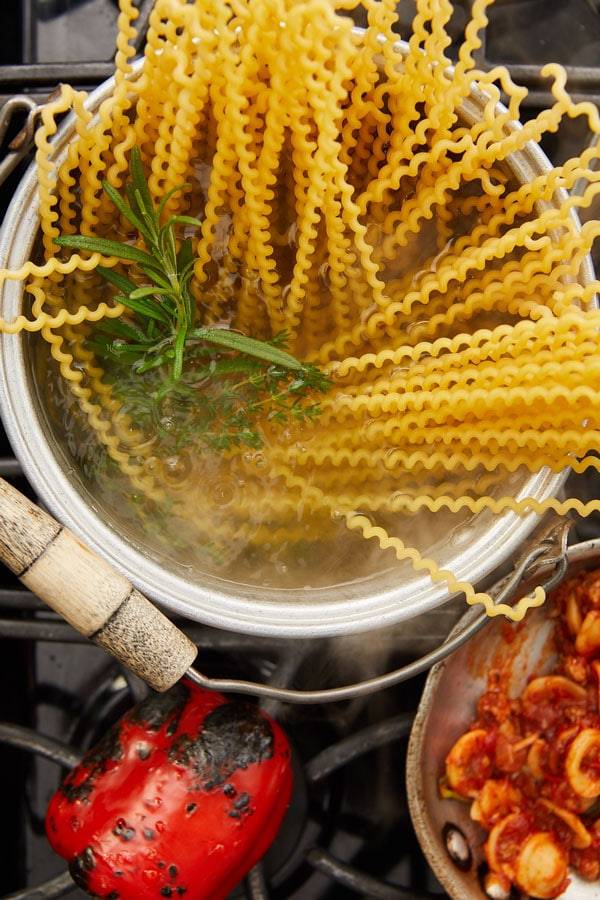 Reserve Pasta Water. After pasta has cooked, reserve a cup of pasta water before you drain the pasta. Reserved pasta water contains essential starch that can be used later to adjust the consistency of your sauce. With oil-based pasta dishes, hot pasta water helps to create a sauce. With thicker sauces, it helps to develop a smoother consistency.

Keep Checking for Doneness. As you get close to the end of your estimated cooking time, taste the pasta. If it is done, it should have a nice al dente bite and taste like pasta. If it is undercooked, it will be too hard and chewy. Overcook it and your noodles will be limp and soggy. Note that once you decide the pasta is done, it will take you several seconds to turn off the burner, lift the pot and pour the contents into the colander. During this time, the pasta continues to cook, so begin testing for doneness 2 to 3 minutes before the end of the suggested cooking time.

Do Not Rinse. Pasta should never, ever be rinsed for a warm dish. The starch in the water is what helps the sauce adhere to your pasta. The only time you should ever rinse your pasta is when you are going to use it in a cold dish like a pasta salad or when you are not going to use it immediately. In those cases, rinsing the pasta helps to stop the cooking process. Drain well before storing.